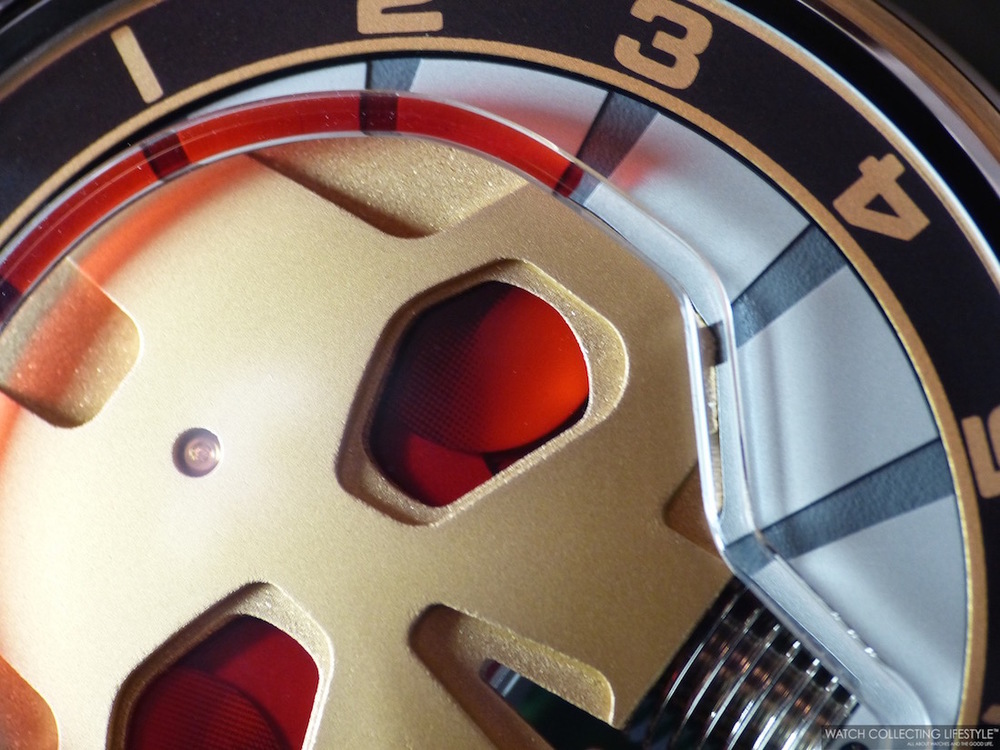 A few weeks ago, while we were in Geneva for the SIHH 2015, we had the chance to meet with our friends from HYT and work on this hands-on review for the just launched Skull timepiece in two different variations, the Green Eye and the Red Eye. HYT’s new extraordinary and unprecedented creation, breaks all the rules. You don’t need to be an expert to appreciate the power of its design. Even at first glance the Skull makes a striking impression, simply because it epitomizes and at the same time breaks away from everything that HYT represents. It is provocative, unique and has a bold design supported by the fluid mechanics that have become the brand’s signature style. The Skull speaks for itself. Its development, however, was anything but obvious. The new HYT Skull Red Eye is definitely more appealing for to those seeking that extra pop on the timepiece, while the Green Eye is a perfect companion for party animals and lovers of neon lights and the nightlife. 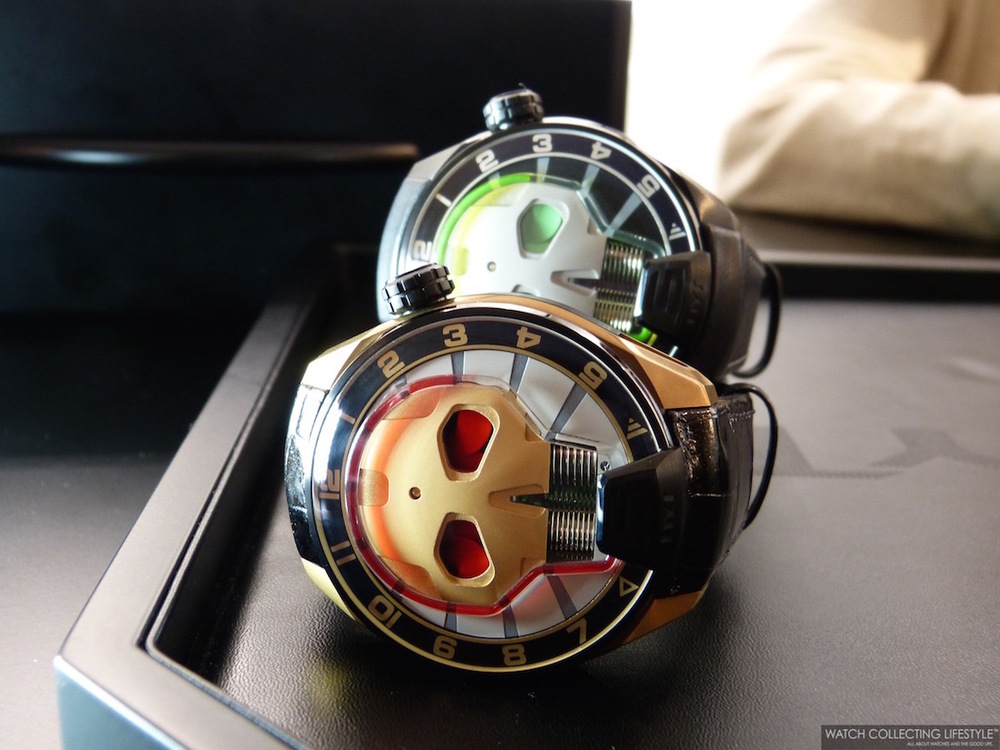 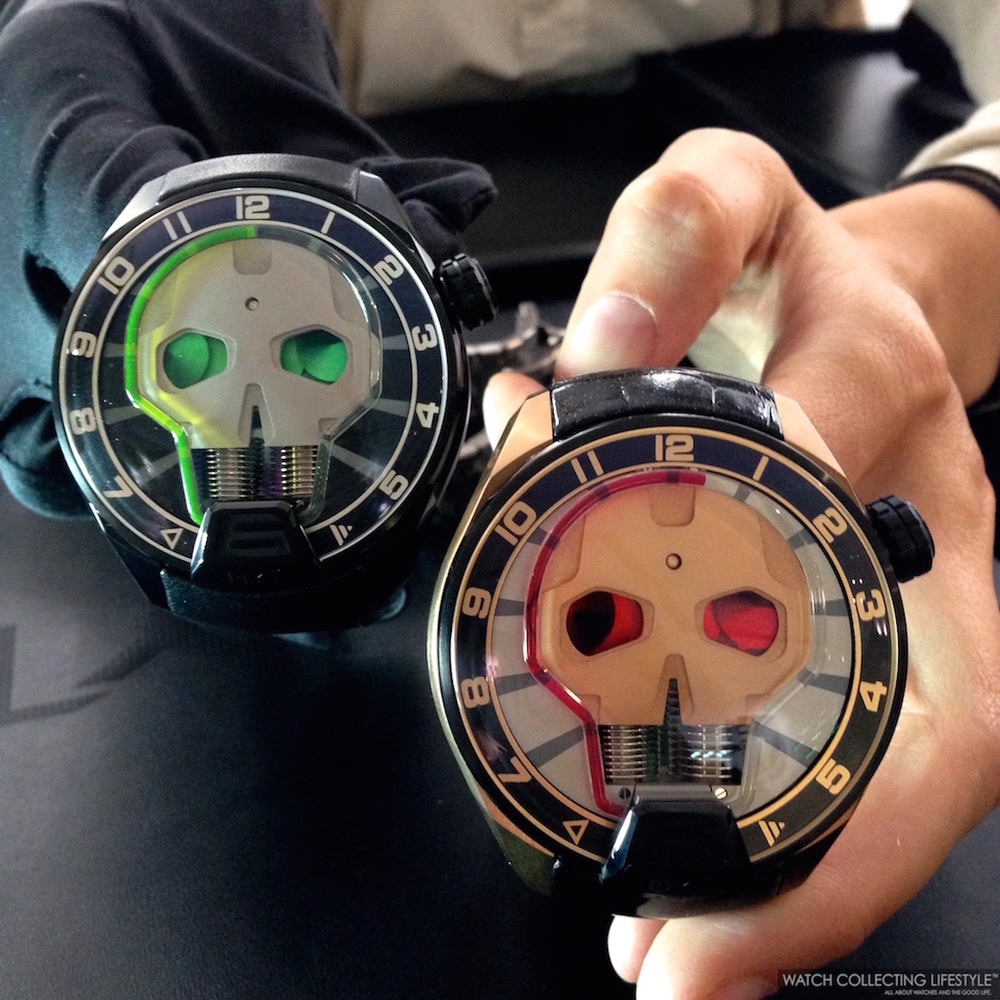 The use of a capillary, which carries a fluid to act as the hour marker, is a concept that is already mastered by HYT and its partners. However, any significant changes in form require extensive background work. For the Skull, the skull shape of the tube, which measures less than one millimeter in diameter, was a significant challenge in itself. The issue centered on the capillary’s four angles, two of which are almost 90° at the base. These curves meant that bending the glass was a particularly delicate task. 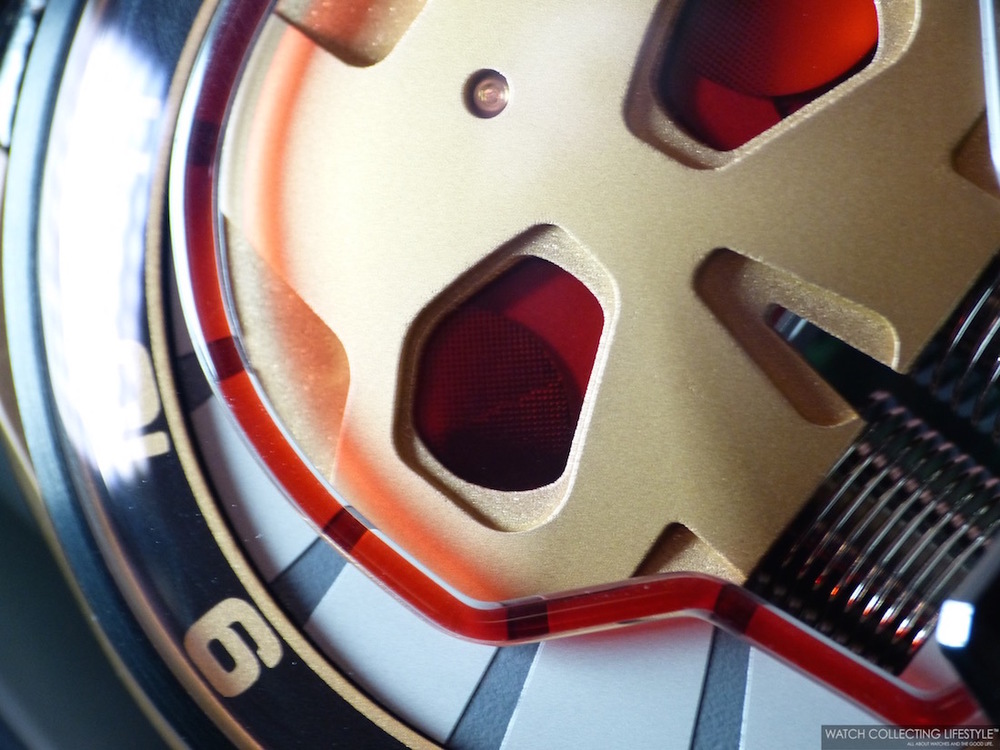 In line with the raw, primitive imagery of the skull, HYT also decided to do away with the minutes. This bold choice has two consequences. Firstly, it shifts the main focus to the capillary, the only sensory indicator of time as it passes, and secondly it centers all the attention on the piece’s architectural design, with its assertive, confident skull, which occupies almost the entire surface of the dial. 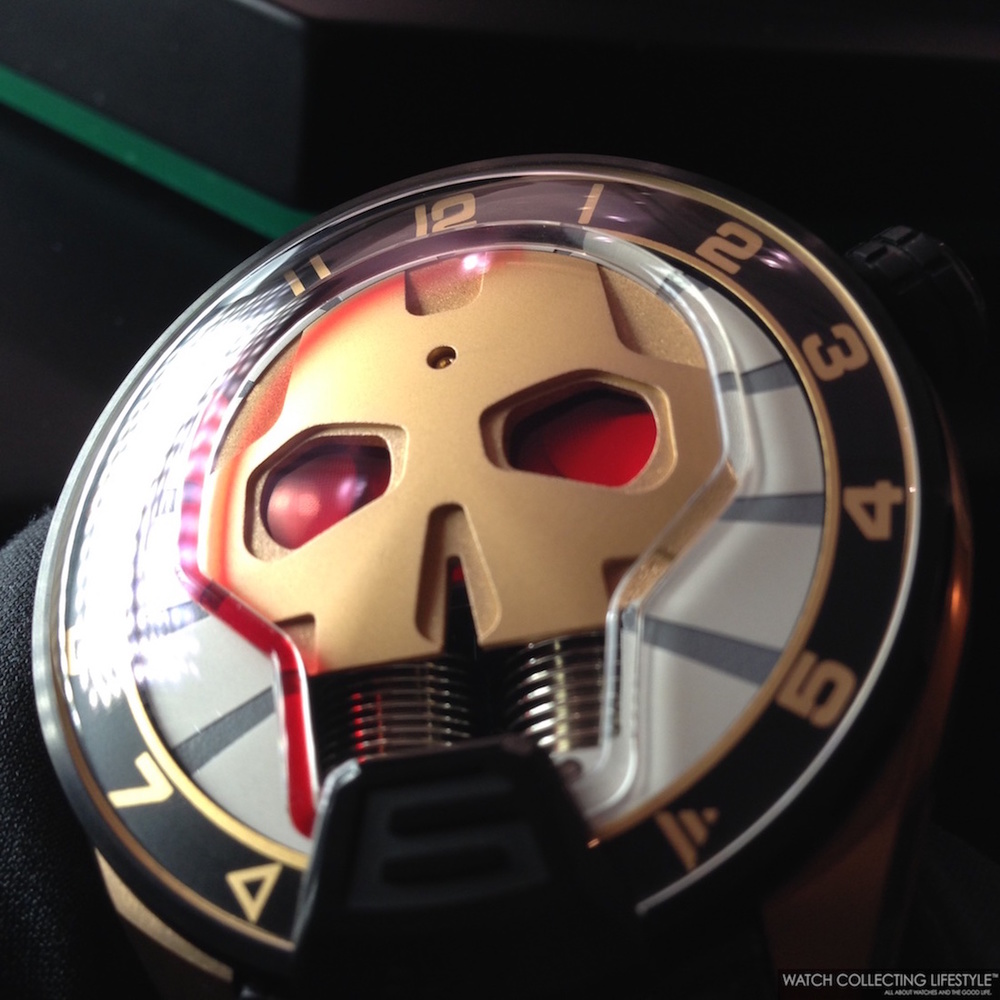 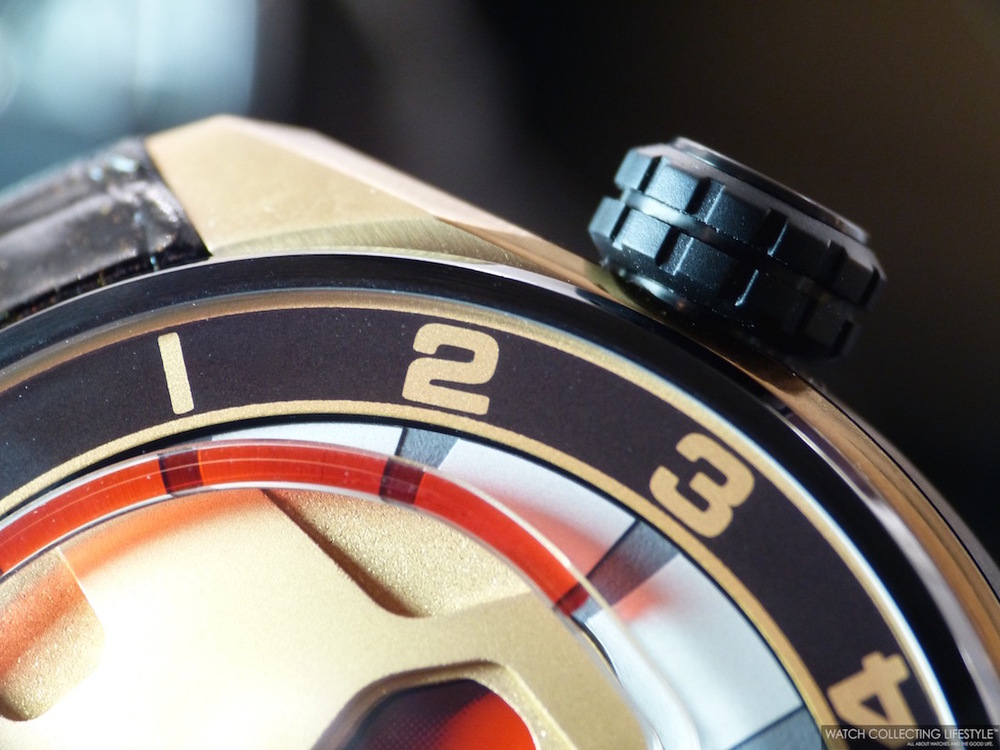 Similarly, in stark contrast to its other pieces, HYT chose to almost completely hide the movement on the dial side. To breathe life into the skull, HYT instead introduced a number of new developments. Firstly, the two vertical bellows function continuously —it is their subtle expansion and contraction which causes the fluid to move. 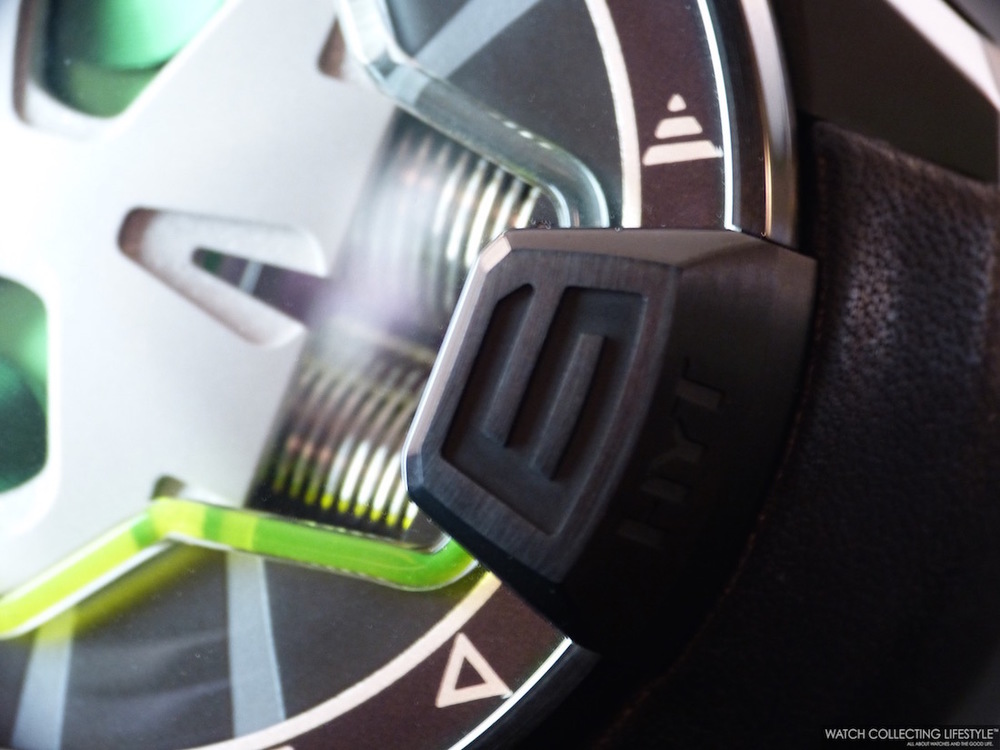 In addition, the eyes of the Skull have a life of their own. The right eye indicates the power reserve of the replica watch. Using a series of subtly different translucent colored inserts, the eye gradually darkens as the piece nears the end of its 65 hours of power. 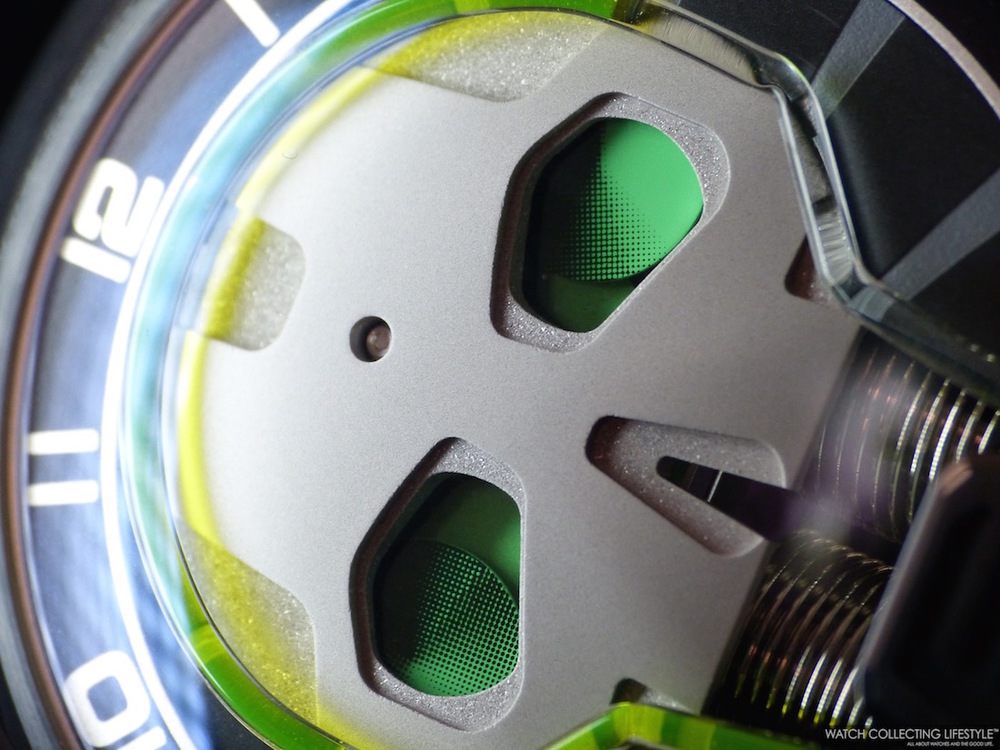 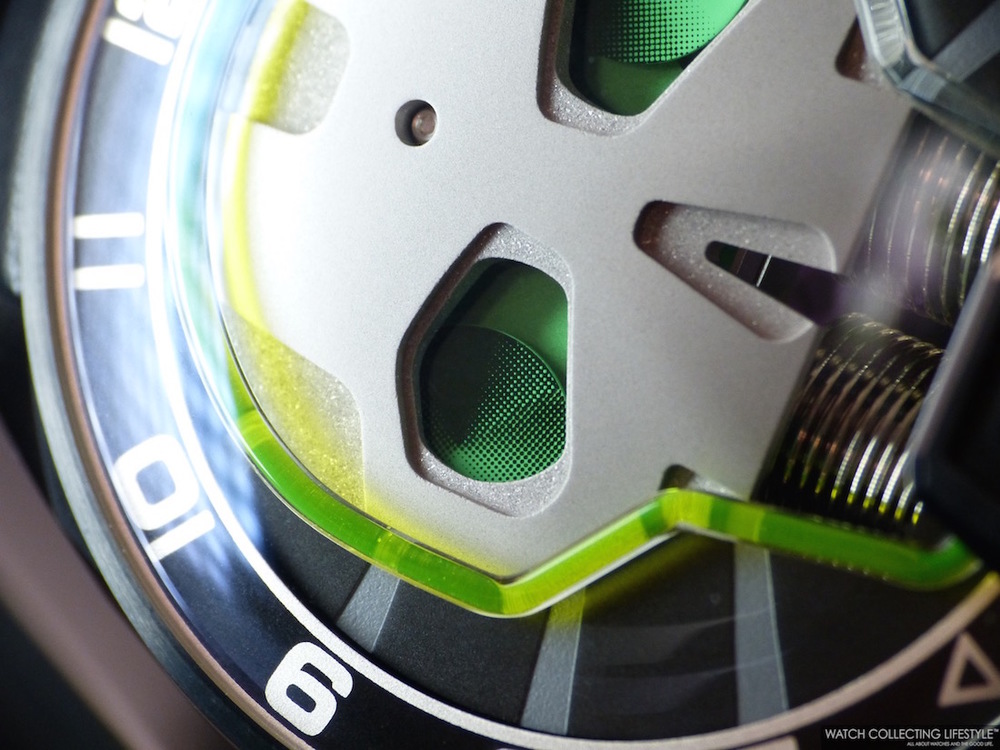 The left eye hides a barely visible seconds dial which rotates continuously. You only have to look the Skull in the eyes to observe its spirit and the life, in the most literal sense, flowing at its heart. In both cases, a subtle honeycomb pattern provides the background and adds depth to the eyes. 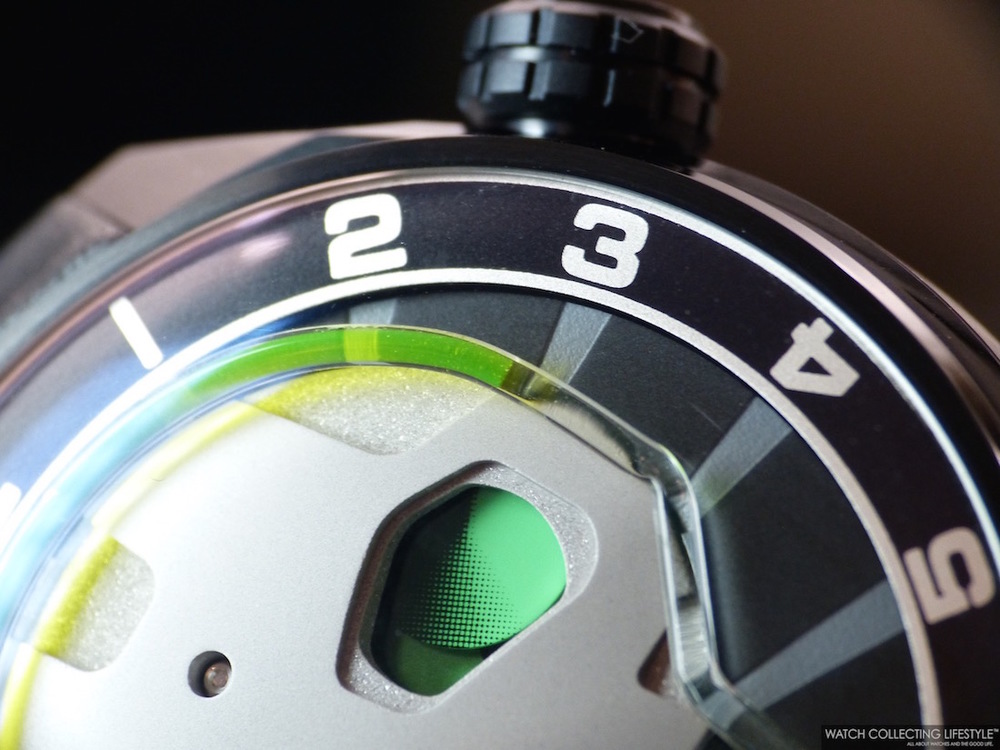 The changes don’t stop at the movement, however, a new 51 mm case has been specially created for the Skull, with the addition of new, crisp angled lugs. The Skull Green Eye is produced in DLC titanium with green fluid as ref. 151-TD-41-GF-AB —50 pieces only— while the Skull Red Eye in 5N rose gold and black DLC titanium, featuring red fluid as ref. 151-DG-42-RF-AB —25 pieces only.

The single assembly push-button of the crown, which adjusts the time, is located between 2 and 3 o’clock. The crown protector has been removed. Lateral inserts have also been added to the case, allowing multiple future combinations. The replica watch is fitted with a nice glittering patent leather strap in the case of the Skull Red Eye and with a matte black leather strap for the Skull Green Eye. Both straps are equipped with a deployant buckle. 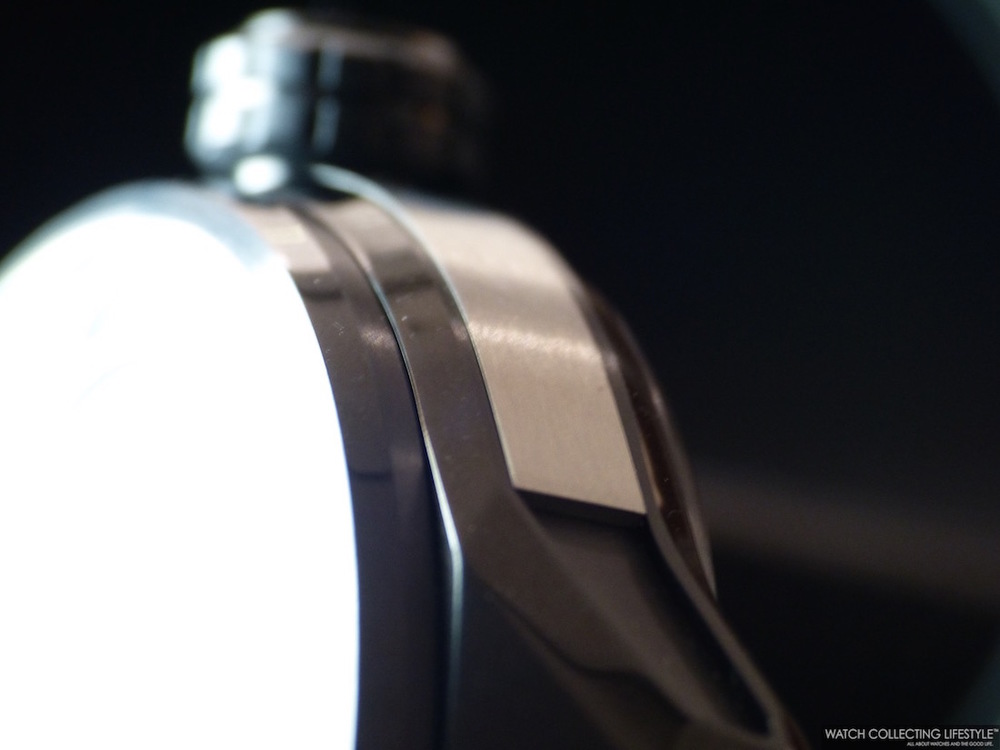 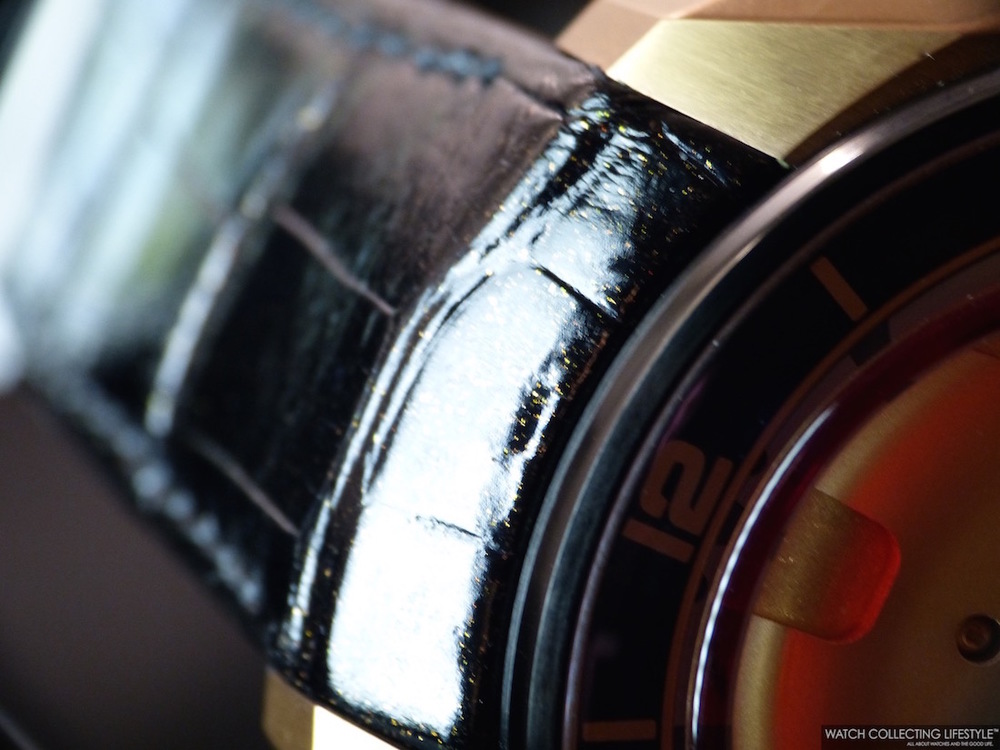 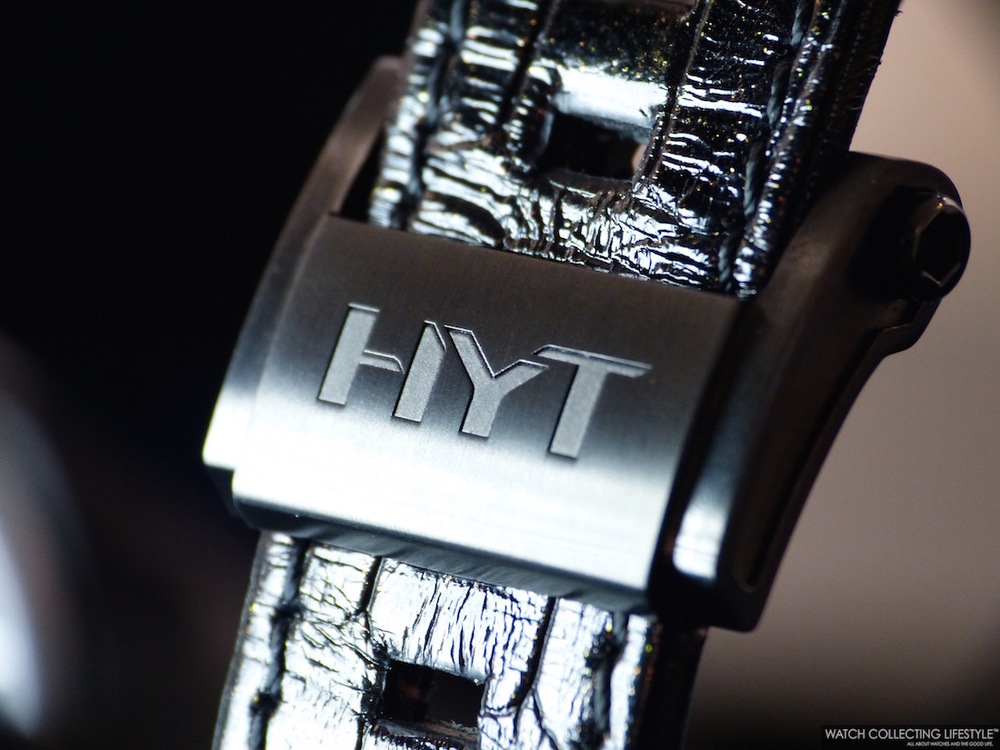 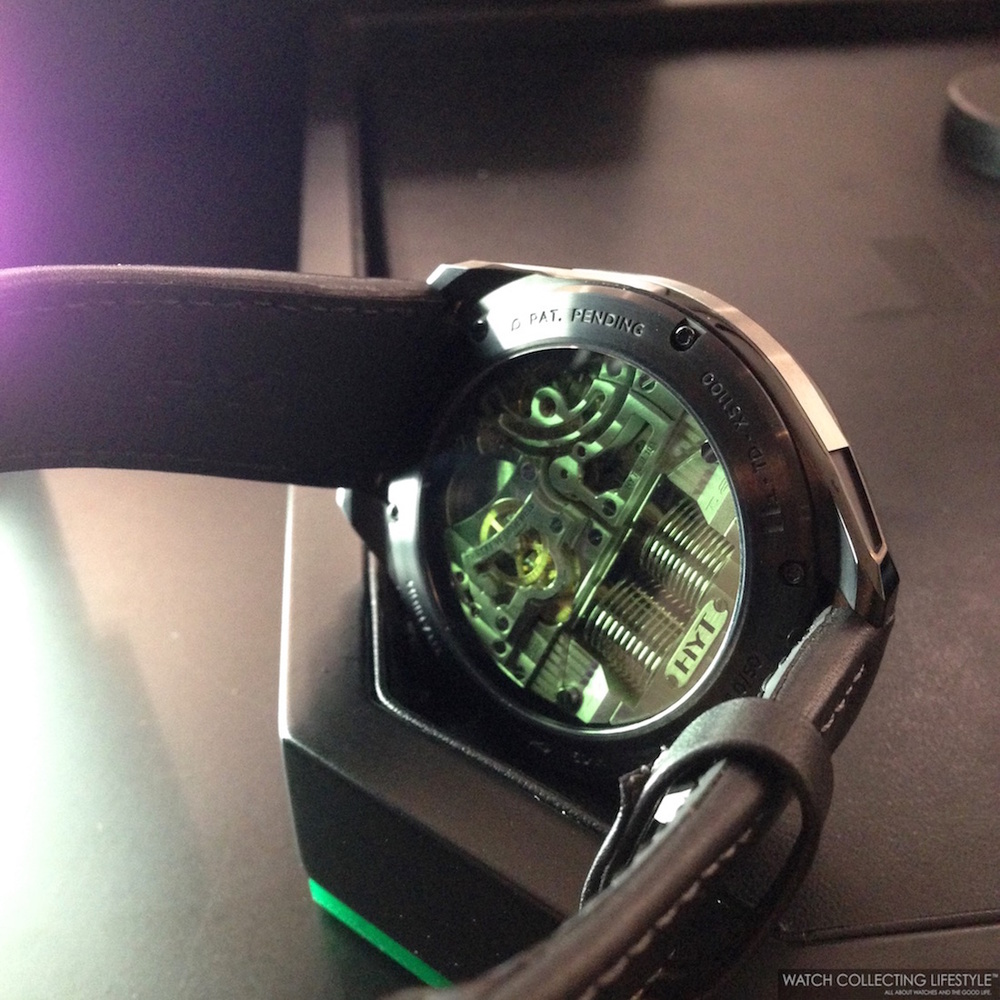 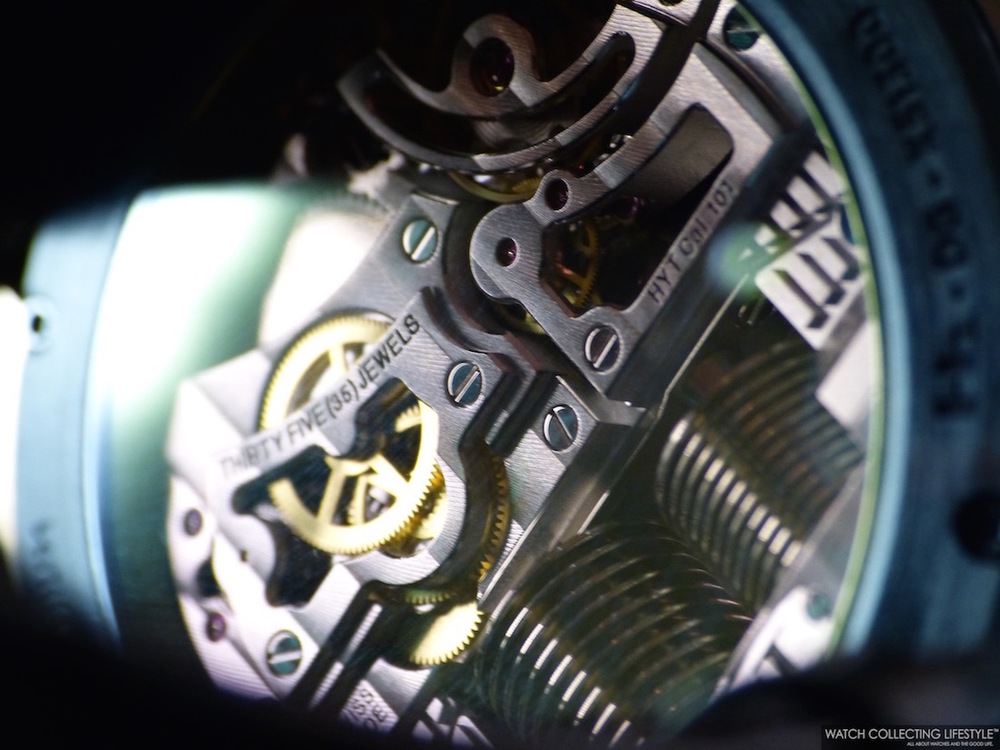 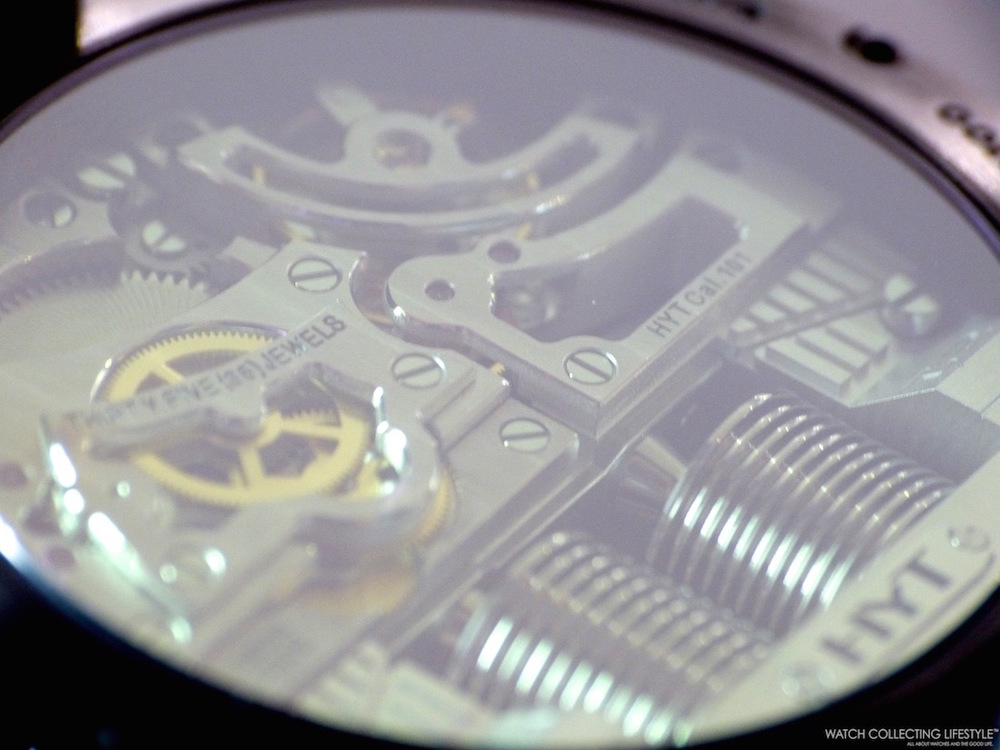 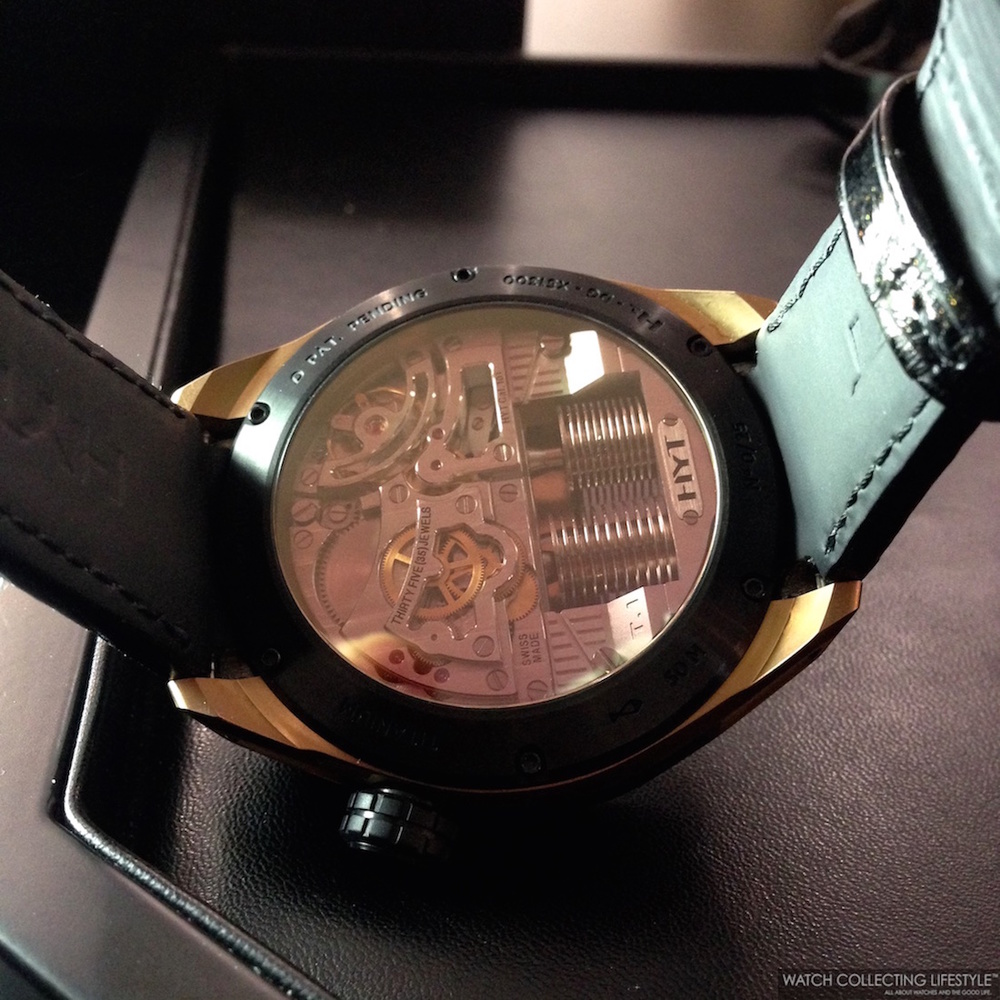 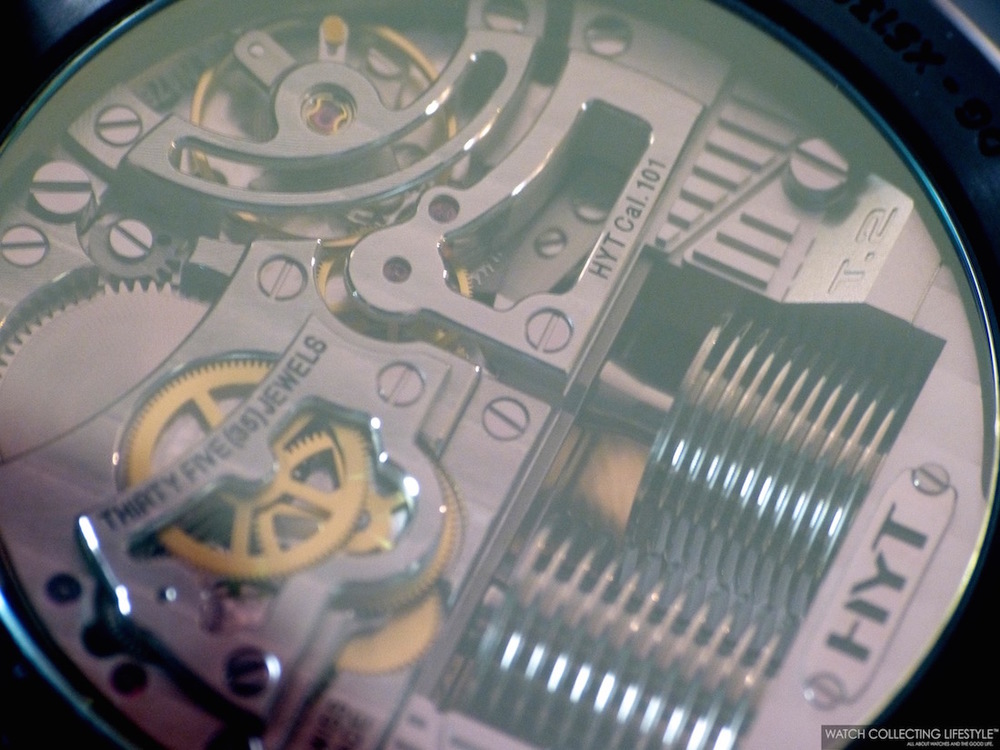 Now, something quite unique regarding the Skull Green Eye is the luminescence of its green fluid and its reaction to UV light. If you enjoy attending the Winter Music Conference or you are just an avid listener of Armin Van Buuren, Tiësto or ATB, this replica watch has your name written all over it. 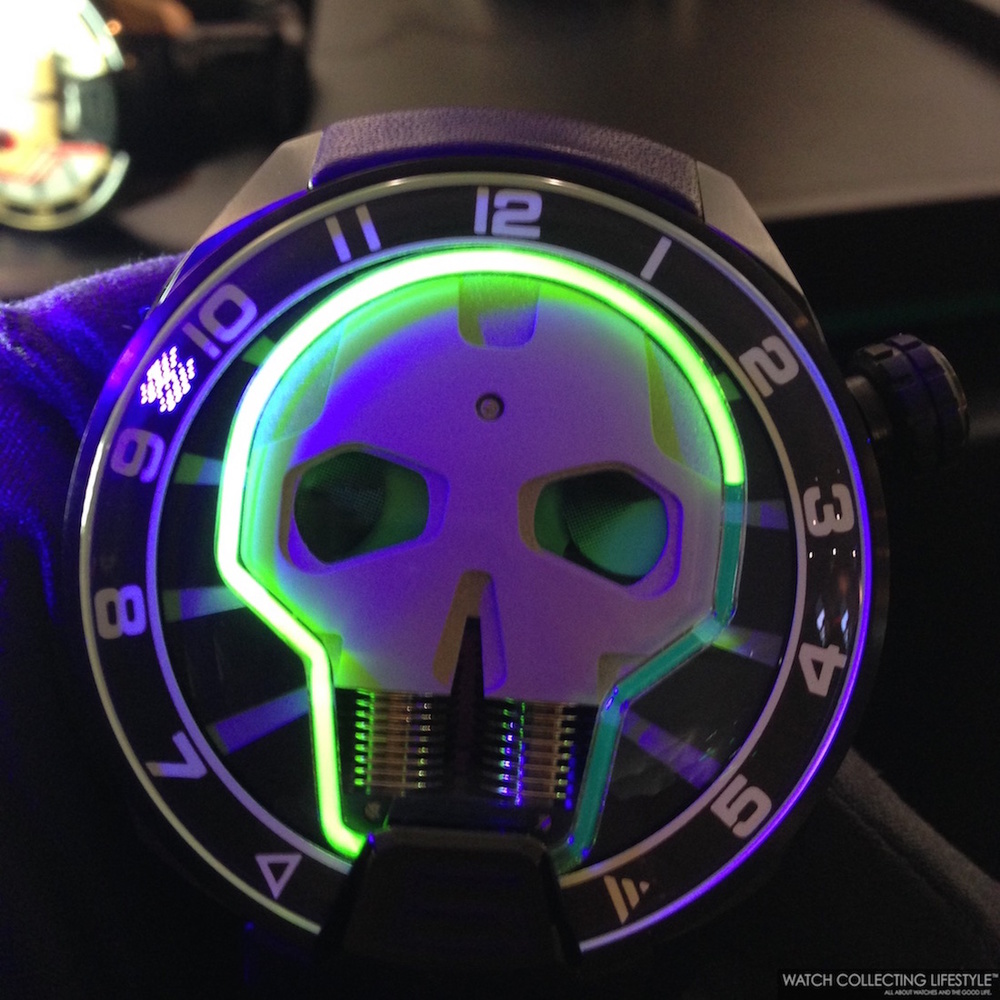 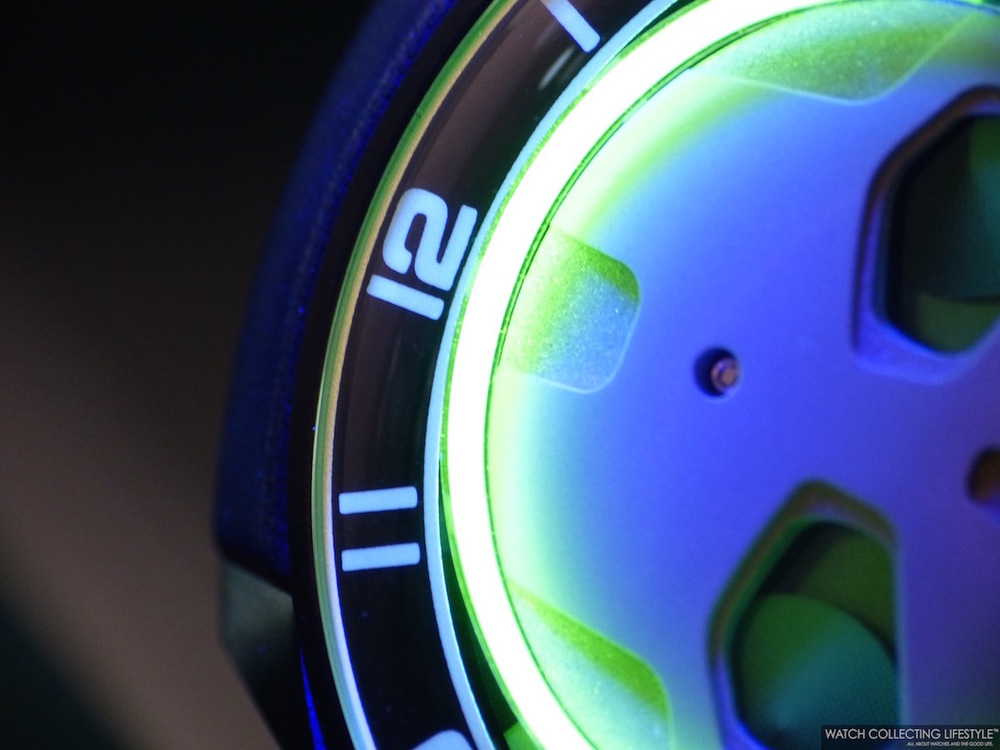 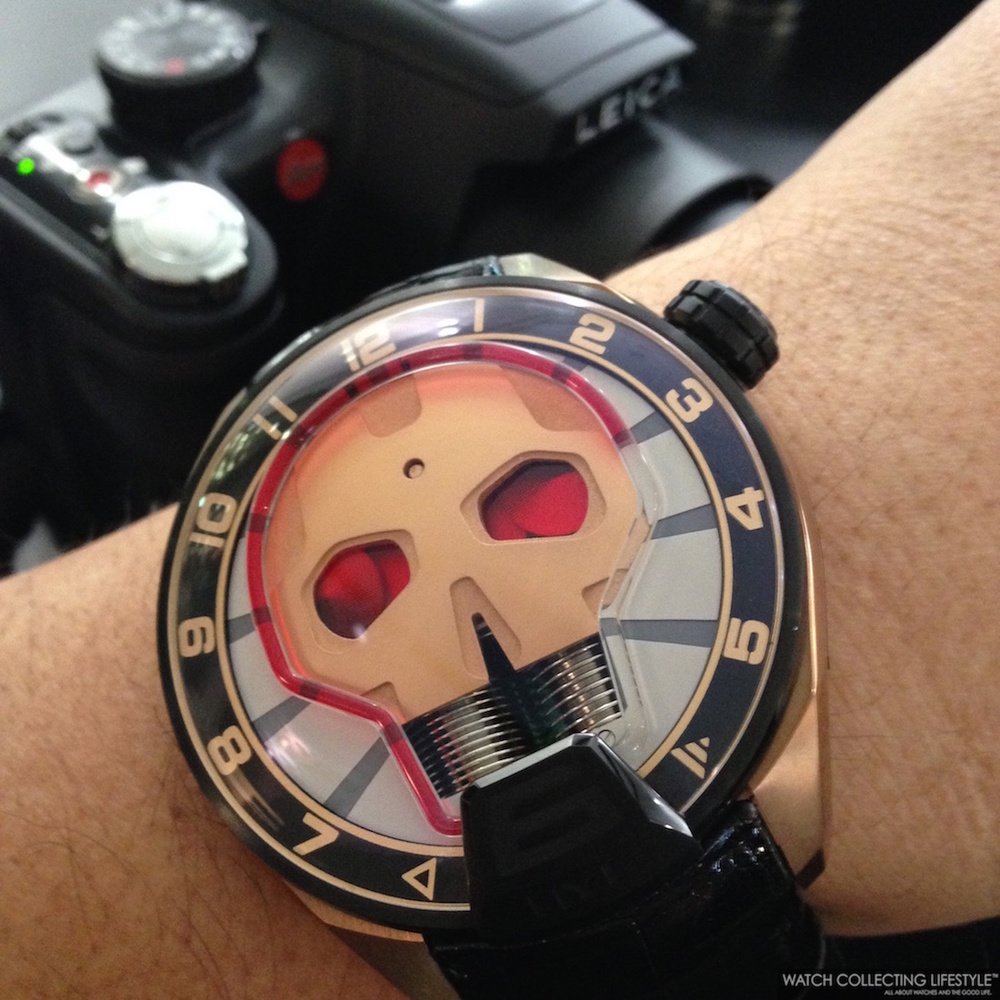 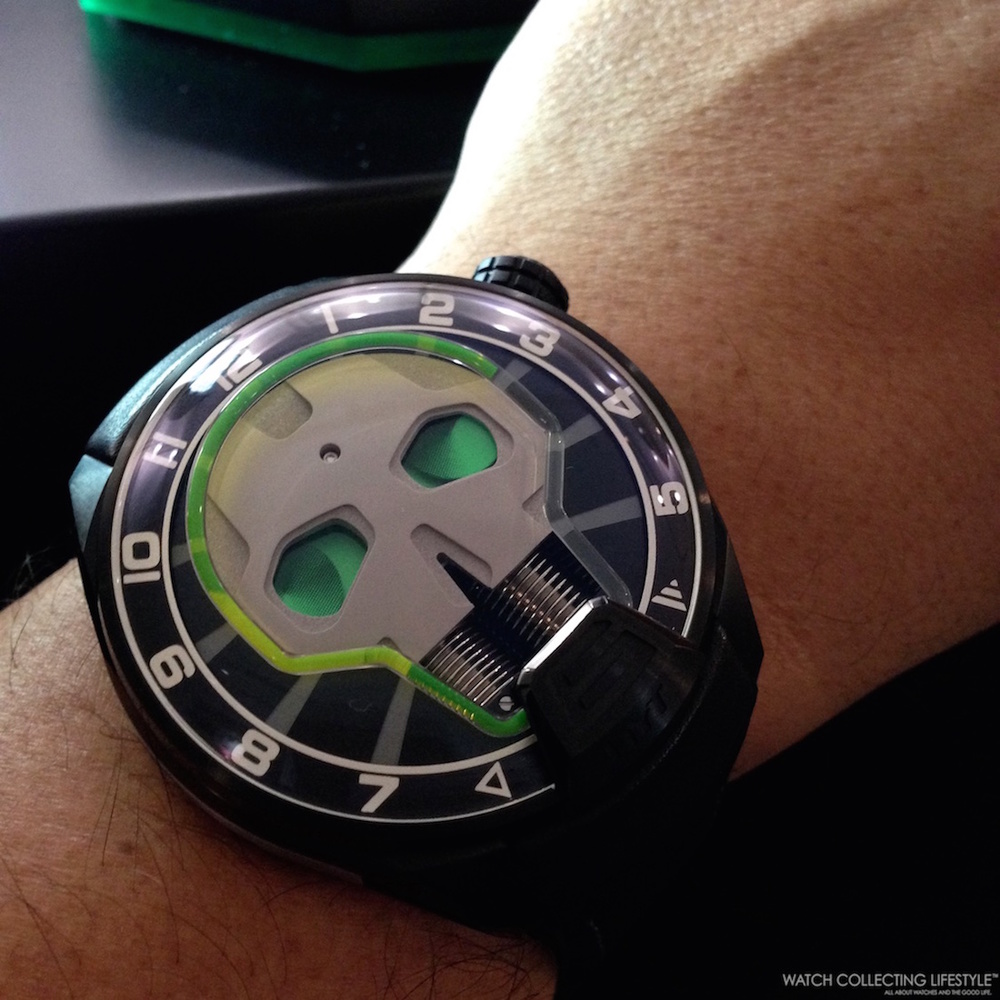 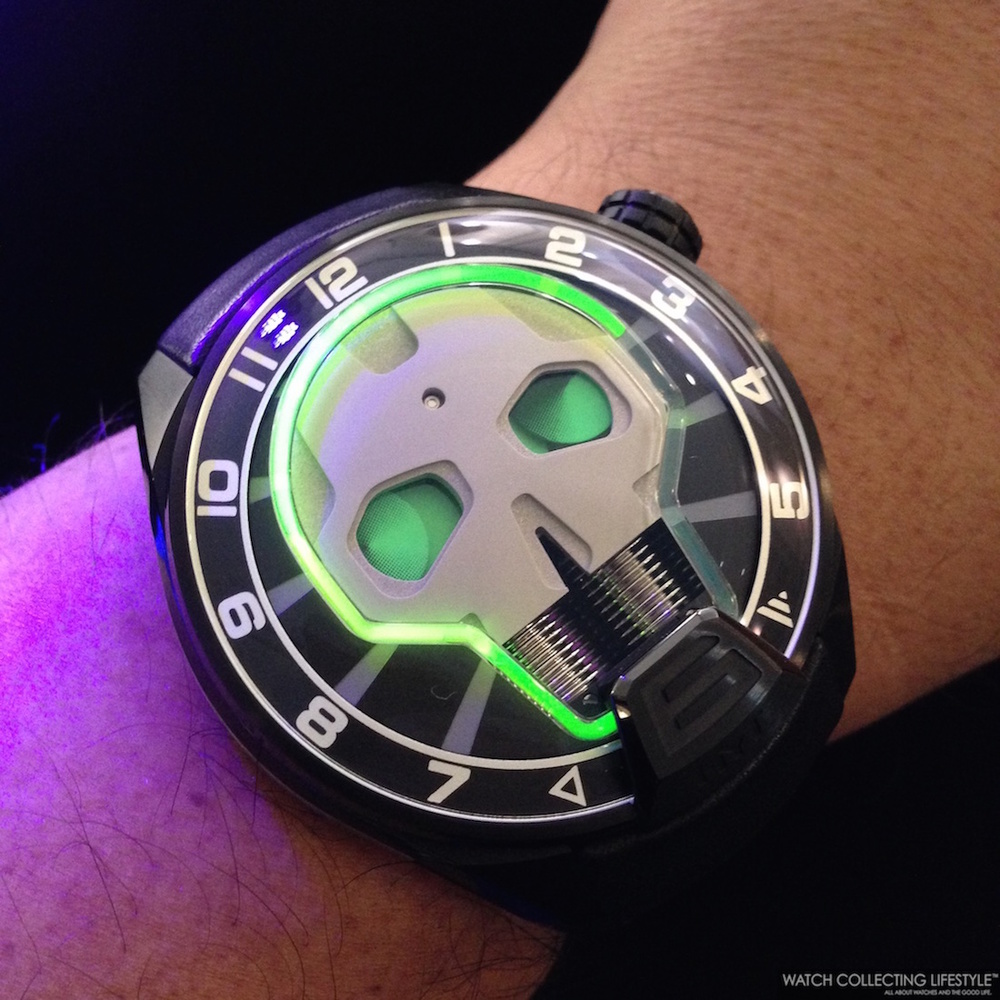